The objective of regenerating the skin is a concept just as old as cosmetics itself.  Aesthetic cosmetics show how we would like to look after the regeneration; however caring or therapeutic skin care with active agents at its disposal aims to support the regeneration while revitalizing, soothing and protecting a neglected, elderly and damaged skin.

Regeneration is perhaps more of a medical term, and summarizes in one word a variety of very complicated cell-biological processes which manipulate cell formation and recovery. Consequently, the term regeneration conflicts with the current and accepted cosmetic approach.  It is understood that in the true meaning of the word, cosmetics really should not be able impart soothing or calming effects, however for many years numerous cosmetic  preparations containing panthenol, urea, essential fatty acids and phosphatidylcholine have done so; and proven very successful.

The success of skin care preparations with these properties has resulted in the frequent paraphrasing of statements such as “anti-ageing", "anti-wrinkle" and "revitalizing" effects.  The products that perform to the rhetoric of these statements are supposed to delay or even stop the ageing of skin or at the very least, soothe against negative environmental effects.  The implication of skin regeneration is somehow always present, and the consumer invariably is influenced to believe it is true.  In addition, products that use the terms “rebuilding" and "repair" further generate this illusion.   When it comes to the term of regeneration itself however, the statements are a little more reserved. It is not uncommon to see such statements as “the product supports the regeneration" or “supports regeneration”. This change in approach indicates that it is not the product, but the body that brings about the regeneration and that it is the product that assists or accelerates the process. In any case, the products generally do not slow down or stop any regeneration.

Typical active agents such as vitamin A acid, fruit acids (AHA acids), vitamin E etc, are usually linked to skin regeneration. They are supposed to stimulate the natural repair or to protect against harmful processes such as free radicals. The order in which what is considered the top active agents changes all the time; however, on a long-term comparison some substances are regularly present – apart from few exceptions. Currently, highly concentrated vitamin E and coenzyme Q10 are some examples. 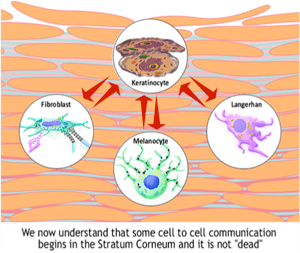 Initially, this may be seen as a step backward into the past, as historically the stratum corneum has been the traditional activity field of the cosmetic industry and has offered little in spectacular treatment solutions, however dermatological research has brought about a lot of new results and finally has put an end to this prejudice.

Care of the barrier layers

It is not necessary to be biochemist or cell biologist to observe these effects in practice.  Over-use of cosmetic products which cause a very low trans-epidermal water loss (TEWL) is a good example. Clients treated with occlusive skin care products which form an impermeable film on the skin – (this especially applies for products high in mineral oils and silicones such as Vaseline, INCI: petrolatum) will always want to continue to use the products because a feeling of extremely dry skin will show up quickly after the client stops using the products. This due to the slow-down of the regenerative skin activities (which can for example be identified in a reduced synthesis of nucleic acids or DNA) as soon as the TEWL reverts back to a higher level.

The return to a normal and natural metabolism activity can take an adaptation period of several weeks, and up to several months dependant on circumstances- it is not a rapid occurrence.  The process can be compared with the slackening of muscles in the case of an athlete taking an extended break from physical exercise and then re-starting rigorous physical training. It will take some time to regain the original level of fitness. Cosmeticians who change their client’s skin care over to a different product type will need to be very patient – and of course, so will the client.  Today, we understand that chemical as well as physical factors of cosmetics have a major influence on the integrity, regeneration and preservation of the stratum corneum and as a result, (though on a secondary level) the processes within the living epidermis are also influenced.  The concept that the preservation of the natural functions of the skin barrier defense systems is the key to skin health is rapidly gaining more and more acceptance as we understand its importance. 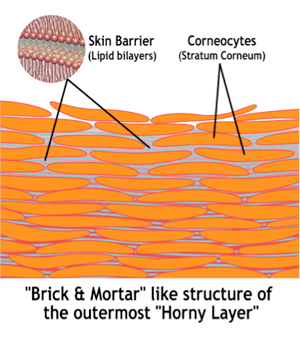 In cases where the membrane structure is disturbed the skin dehydrates and due to its increased roughness or developed cracks, it is even more susceptible for the penetration of harmful substances.

The objective of recent treatment concepts is to keep the membrane structures between the Corneocytes in as much as a natural and intact condition as possible. The type of skin care formulation that would best perform this function has components which are very well tolerated by the natural membrane structure and which are able to restore it without impeding the natural regeneration of the skin.

In this situation, two factors are very important:

In the prevention of skin problems, positive results could be achieved with products whose physical structure is skin-identical or skin-like. An example is the condition of atopic dermatitis (neurodermitics) which displays an extremely disordered skin barrier. Individuals with this condition suffer when the disordered skin barrier is no longer able to regenerate. They keep applying cosmetic and dermatic products, and in spite of their efforts there is no long-term success. In case of inflammations their dermatologist would prescribe corticosteroids which cause a short-term improvement, but long term, they contribute to an increased skin sensitivity and deterioration of the general skin condition.

Experience has shown that a high percentage of atopic dermatitis sufferers can be helped simply by supplying skin care creams which are free of emulsifiers. Emulsifiers have both positive and negative properties. The positive aspect is their capacity to combine skin-caring fats and oils with a watery base in a stable condition. Their disadvantage is that they usually retain their positive property in the skin as well and (with the exception of only a few types of emulsifiers) as a result disturb the natural skin barrier.  Inevitably, fat substances and barrier components will later be transported out of the skin after prolonged contact with water. The damaged skin barrier of atopic dermatitis is specifically susceptible here.

When individuals with atopic dermatitis use skin care creams that are free of emulsifiers in conjunction with beneficial active agents such as linoleic acid (essential fatty acid) and urea, the skin barrier will reactivate its own regeneration processes, and after a period of time, and the problems will usually ease significantly.

Ceramides provide an important contribution to the preservation and regeneration of the skin barrier, and are metabolized and released into the skin barrier layers by the keratinocyte.
One of the most important Ceramides is the linoleic acid containing ceramide 1, and a decreasing availability of ceramide 1 will usually correlate with an increase in pathological skin conditions.  It is for this reason that formulations that employ vehicles such as liposomes and nanoparticles whose shells normally contain high concentrations of linoleic acid become increasingly important as active agent additives.  Likewise, the same physiological events of atopic dermatitis described previously are also applicable for the lower (but still relatively high percentage) of psoriatic patients.
Individuals affected by psoriasis also have an extremely disturbed skin barrier, but in contrast to atopic dermatitis, the symptoms are a hyperproduction of keratinocytes that fail to desquamate properly when in their corneocyte phase, and this is commonly in combination with inflammation.  Psoriasis patients also benefits from liposome products since they are able to rebalance the disordered skin balance (homoeostasis). The condition of the skin barrier will then normalize.

Salts are a very important regulator of a healthy skin. Salts not only influence the hydration of the stratum corneum but also normal cell proliferation, cell differentiation and the synthesis of epidermal and barrier-active fat substances linked to it. They are also an important component of cosmetic products supporting skin regeneration. The variety of salts and their specific effects is too broad to be described here in detail, but it is important that their correct quantities in the skin are maintained.

The relationship between these water soluble salts and the natural moisturising factor (NMF) should also be understood. If necessary, the NMF should be supported with skin-identical substances such as urea.

A major factor in optimum skin barrier care is skin cleansing. Cleansing the skin with water based substances involves an increased washing out of epidermal protective substances. This is in part due to the previously mentioned activation of the emulsifiers in the skin and also partly due to the effects of the surfactants (tensides) included in the cleansing products.  Even though there are now cleansing products available with pleasant foaming and lipid rich (re-fattening)  properties, it should be mentioned that unconventional non-foaming products with very mild surfactants, (e.g. sugar tensides) and products free of re-fattening agents will take better care of the skin, and are better tolerated by sensitive skins.

The best single strategy to preserve a healthy skin condition corresponding to age is to preserve the natural skin barrier with the help of suitable products. Thus, both protection and prevention are optimally guaranteed. Furthermore, a low dosage applied often is generally more successful than the intensive treatments which are favored today.  Quality dermatological cosmetics however, do not come without a price; as products free of emulsifiers (with the exception of shaken mixtures or the good old-fashioned cold creams) require complicated production technology.  Another important factor is that because their components are not just staying on the skin surface but are being integrated into the barrier layers of the stratum corneum where they set up deposits, these formulations must ideally be free of preservatives, perfumes and colourings.