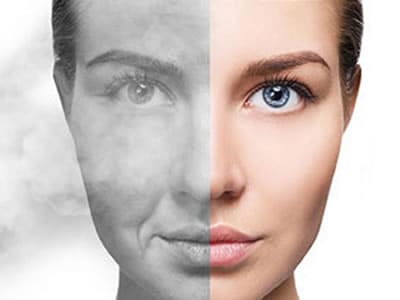 Anti-Pollution Cosmetics and its Environmental Influences

In this article, we explore the currently popular term "Anti-Pollution Cosmetics" to rationalize the validity of the statement. Protection against harmful substances often is mentioned without specifying the environmental influences or stating what kind of "detoxifying" mechanisms are taking place.  Perhaps the preparations are not so different from conventional cosmetic products and their claims.

Stricter laws have led to a drop in environmental pollution in Germany in the past decades. By the same token, the individual sensitivity to harmful environmental influences has been on the increase. Besides the products for skin protection, also “detox” cosmetics have become established today. An expert on the subject informs on mechanism and point of action.

Apart from body cleansing, fragrance purposes and decorative care, cosmetic preparations primarily focus on preventive skin protection. While cosmetic skin protection has historically focused on the strengthening of the skin barrier by administering fatty substances or, in other words, has been oriented towards a more passive approach, it took quite a while until the aspect of more active skin protection was added.

Active skin protection implies the use of active agents to fight external influences, neutralize them or render them harmless. Sun protection preparations with UV filters to reflect high-energy UV radiation or transfer them into heat may serve as an example here. [1]

Sunlight only is one factor out of many environmental factors that affect the human organism and the skin. Basically, there are three groups:

They comprise the already mentioned UV radiation as well as the resulting hydrocarbon radicals when, with the involvement of atmospheric oxygen or ozone, natural lipids, volatile plant-emitted hydrocarbons (VOC = Volatile Organic Compounds) but also synthetic skincare components such as polyethylene glycols (PEG) [2] are affected.

Also, nitrogen dioxide belongs to the radicals. Nitrogen dioxide forms after atmospheric electrical discharge such as thunderstorms, but also on high voltage power lines and in internal combustion engines of motor vehicles.

Also, aerosols, i.e. solid and liquid particles such as dust and fog play a role. Examples are pollen, swirled up, partly nanoparticular minerals such as aluminium oxide (clay) and silicic acid (sand) as well as any kind of microorganisms and their metabolic products.

Contact allergens are ubiquitous [3]; they are of herbal (i.e. toxins, proteins, phototoxic components) and animal provenance (mites, cat hair etc.) but also originate from the herbal extracts in cosmetic preparations with their numerous partly unknown components. Last but not least, water quality is of importance since high concentrations of hardness components (calcium, magnesium) in combination with intense skin cleansing routines (see below) can aggravate already existing barrier disorders. [4]

Examples are are soot particles including polycyclic aromatic hydrocarbons (PAH), volatile organic compounds (VOC), nitrogen dioxide (see above), sulphur dioxide resulting from the combustion of heavy fuel oil and coal, cigarette smoke as well as numerous irritation and allergy-triggering chemicals (preservatives and disinfecting agents, among others) [5], that are used for occupational and household applications.

These, without any doubt, take the heaviest toll on the skin. Nutrition [6], pharmaceuticals [7], lack of physical exercise, heavy metals (fashion jewellery, household utensils), a wrong perception of hygiene [8], as well as too much skincare [9] have a strong impact on the condition of the skin. Major consequences are damage to the skin barrier and the skin microbiome.

The list could be largely extended. Providing full and overall protection of the skin is an illusion though. It is not even beneficial since many of the natural influences help to immunize the human body, a process that starts already before birth.

It is no secret that the susceptibility to atopic skin commonly appears after too much hygiene and that the rural population is less prone to analogous barrier disorders.

Day creams equipped with UV filters that inhibit the endogenic vitamin D synthesis are a similar issue – with numerous effects on the metabolism of the human body. Rosacea conditions on the Celtic skin after years of fruit acid peelings are a further example of too much skincare.

How can we protect ourselves?

In order to protect ourselves against environmental stress, it is advisable to start in our personal environment by changing the cultural factors. The adaptation of our behaviour, certain routines and the products we use should have priority.

There also is scope for action with respect to anthropogenic impacts (i.e. man-made influence) – particularly in dealing with chemicals. It is appropriate to check the composition of the products, look for alternatives, refrain from using chemicals and protect oneself by wearing gloves, applying creams etc.

A certain rate of air pollution probably is unavoidable and this also applies to all sorts of natural factors, which means that it should be carefully considered what kind of countermeasures can be taken in the form of active agents (active skin protection) in skincare preparations.

From conventional skin cleansing preparations via peelings up to fruit acid treatments, a whole variety of them has recently been labelled as having "detoxifying" effects.

The label however can be misleading for uninformed consumers. It is a matter of fact that skin cleansing preparations remove environmental substances. It should however be mentioned that exactly those frequent and "deep pore" cleansings often are the gateway for other counterproductive influences.

It also is a fact that even the best skincare cream cannot substitute the washed-out natural barrier substances of the skin. Also, the traditional products designed for the absorption of foreign substances such as healing earth (loam and clay), zeolites, mud packs, activated carbon (charcoal) or appropriate masks still are beneficial, however, terms such as "detox", "anti-pollution", "decontamination" or "purification" in this context are not grounded in reality.

Cleansing products often contain the synthetic chelating agent ethylenediaminetetraacetic acid (EDTA) which binds hardness components and heavy metals. EDTA is rather persistent and also binds the heavy metals of the epidermal enzymes during cleansing. Herbal chelating agents and a number of synthetic peptides have similar functions.

The slightly chelating properties of polyethylene glycols (PEG) in skincare creams cause the release of nickel which still is a component in fashion jewellery, a process which subsequently can trigger allergies in the skin.

The substances in cleansing preparations and body creams influence the microflora of the skin in a variety of ways. Among others, the microflora produces acids to keep the pH value of the skin at a low level. On the other hand, the germs are facultative pathogenic which means that they are a potential trigger of skin diseases, particularly in cases where the barrier already is disordered or in cases with cornification disorders. High lipid contents support anaerobic germs [10], and preservative the formation of resistant germs just to mention some of the potential effects.

That is why care should be taken that the formulations support the skin barrier in chemical and physical respect and that only the amount of cream is applied that actually is needed. Counterproductive cosmetic additives should be avoided. With skin cleaning routines in moderation and avoiding tensides as often as possible, also the risk of fungus infections can be reduced.

Antioxidants, also called radical scavengers [11] , are an ample subject. Among them are vitamins, herbal and synthetic substances. They are frequently but not always effective when atmospheric radicals such as the already mentioned nitrogen dioxide or radiation triggered peroxides get onto or into the skin. As the majority of them inhibit the formation of the skin protective melanin and since an overdose can trigger the counterproductive radical chain reaction, as already well-known, it is recommended to use them in moderation only. It is still better to support the natural protective system of the skin – consisting of the amino acids of the NMF (Natural Moisturizing Factor) – by applying well-penetrating liposomal amino acids. Amino acids not only retain the skin hydration but also eliminate the radicals. [12]

It should be mentioned in this context that also peptides and herbal extracts (including stem cell extracts) are offered on the market for the alleged stimulation of the endogenic antioxidative cell protection. By the way, the atmospheric sulphur dioxide (see above) is an antioxidant and for instance, added to wines or juices in the form of sulphurous acid.

Since radiation and radicals stimulate both melanin formation and vitamin D synthesis, there is no sense in formulating sun protection products with antioxidants. Just consider in this context that most of the healing processes of the human body such as fever and anti-inflammatory processes as well as the elimination of foreign cells including cancer cells are radical processes. Hence too much of antioxidants can be counterproductive. Apart from that, more and more products with polyphenols in the form of tea extracts (white green, black) with simultaneously anti-oxidative and astringent effects are offered on the market. Not a new approach though: it rather recalls the tried and tested old-fashioned infusion.

Concerning active agents, besides the conventional skin barrier protection, the products against environmental stress until now have been limited to UV filters (sun protection), all sorts of skin cleansing (removal of external foreign substances and endogenic skin components) and antioxidants (protection against radicals).

Beyond that, the protection against harmful substances often is mentioned without specifying the environmental influences or stating what kind of "detoxifying" mechanisms are taking place. Hence the preparations basically are not different from conventional cosmetic products and their claims.

Removal, degradation and recycling of undefined toxins are inventions of the marketing departments and also commonplace in the context of food supplements where they are not defined either. Many of the products contain preservatives, perfumes and other cosmetic additives that do not fulfil the conditions of the complex subject matter.