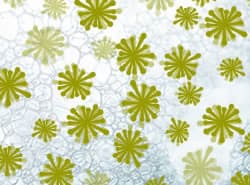 This article was written in response to a number of requests for information explaining the purposes, properties and disadvantages of emulsifiers in skincare formulations. It has been also published under the title "Why say no to Emulsifiers" in other digital and print media.

Have you had clients say to you, "I use my moisturiser daily but my skin still feels dry!" Or "I feel I need to re-apply my moisturiser twice a day because my skin always feels dry!" Or have you had a client use up all of her moisturisers in half the time she should? If so, these are indications of the "washout effect" of emulsifiers and how they can exacerbate fast trans-epidermal water loss and lipid dryness.

Moreover, their use is largely unregulated and considered an easy and inexpensive way of combining the oil and water phases of an emulsion.

Most emulsifiers can be considered “surface-active agents”. This property means that they are able to reduce the surface tension of water. This means that they float within the interfaces between aqueous and oily phases and thus form links - the essential precondition for emulsifiers, and an emulsion is created.

When surface-active agents are used to combining the water and oil phases of cream, they are called emulsifiers. When used for skin cleansing purposes, surface active agents are referred to as tensides or surfactants.

Skin tolerance of these substances may vary; anionic short-chained combinations such as lauryl sulphates and also lauryl ether sulphates may cause skin irritations. They are also widely used among other components of food and cleaning agents, lubricants, and colour cosmetics. 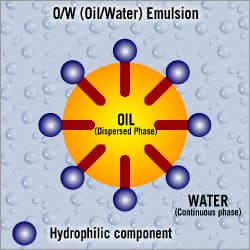 Oil in water emulsions are usually the most common in formulations due to lower production cost, ease of application and light texture. (Typical use: moisturiser)

A moisturising cream is a mixture of water and oil substances and is referred to as an oil and water-based cream O/W. A small amount of oil into a large amount of water.

Emulsifiers are surface-active agents which means that they float within the interfaces between aqueous and oily phases and thus form links - the essential precondition for emulsifiers.

When used for skin cleansing purposes, surface active agents are referred to as tensides or surfactants. When used to combine the water and oil phases of cream, they are called emulsifiers. Surfactants and emulsifiers have a surface-active ion that is either positively or negatively charged, contains no charge or has a dual charge as seen in amphoteric surfactants. 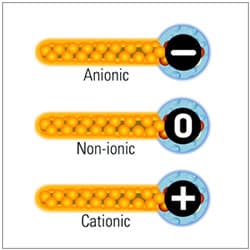 Negatively charged Anionic surfactants are the most commonly used cosmetic emulsiﬁers because they are cheap and stable. This emulsifier is the most widely used type of surfactant for laundering, dishwashing liquids, and shampoos because of its excellent cleaning properties and high foaming potential.

The first three lines of skin barrier defence are the acid mantle, the multiple lamellar lipids (bilayers) and the corneocyte. The most important components of the corneocytes contributing toward intercellular cohesion are the multilamellar lipids. The lamellar lipid phase is primarily responsible for slowing transepidermal water loss. The skin will exhibit changes in appearance when there is deterioration in these important skin barrier defence systems. The negative visual appearance may be in the area of application of a leading cause such as foaming cleanser, dishwashing liquid, allergens or pathogens.

Many creams will aggravate skin that has lost the ﬁrst lines of skin barrier defence, and consequently, there is a growing market for “cream substitutes” for skins that need an artiﬁcial skin barrier defence without the risk of side effects that more conventional creams may cause.

The answer is derma membrane structure creams, (DMS creams) these creams have formulations that do not contain conventional emulsiﬁers. Instead of emulsifiers, these creams contain membrane components with a physical structure comparable to the barrier layers of the skin. Instead, they contain physiological lipids that mirror the lipid component of the skin such as ceramides, phospholipids, EFA’s and hydrated phosphatidylcholine.

A long time has been spent on researching bases that are more compatible with the physiological properties of the skin than the conventional O/W or W/O emulsions, and from the liposome and nanoparticles technologies, this concept was born. This approach avoids conventional additives like emulsiﬁers, perfumes, mineral oils, silicones and emulsiﬁers.

There is a big surge toward derma membrane structure creams (DMS creams) that have a physical structure similar to the skin's barrier defence layers. With a chemical composition similar to skin physiology and is emulsifier free, these creams are becoming popular as a vehicle or base for modern skincare dermatological preparations and topically applied medications. However, because of the technology and knowledge required in creating derma membrane structure creams, the developers of domestic retail market products are unlikely to offer these advanced types of creams for quite some time.

All preventative treatments should aim to maintain the skin barrier in its best possible natural and intact condition. This can only be achieved with external agents that are able to repair the natural barrier and will not impair the regeneration from within. So it is obvious to use agents similar to those the body uses itself.

Mimic is the term often used. The analysis will show that the TEWL of disordered skin decreases significantly, and skin lipid level and hydration increase after application of DMS based creams.