The epidemic of over-exfoliation

Why we should be preserving the integrity of the epidermis This approach has perhaps come about from the advent of glycolic peels in the early nineties, and progressed on through to now, with Micro-dermabrasion machines, enzymes and acids galore to choose from.
One could be forgiven for thinking that it is as if the industry has forgotten that one of the core ethics of the skin treatment profession is to "preserve the integrity of the epidermis" at all times.
Have we also forgotten that the epidermis, a major line of skin barrier defence contains many intricate systems that work in synergy with one another to protect the body? Unfortunately, our client’s Skin Barrier Defences are put to the test by many therapists, clinicians and even dermatologists. Occasionally, this can be by intent, but more often unwittingly.

Each day the skin suffers multiple attacks, whether physical or mechanical, from undesirable microorganisms or the sun. It withstands these with very sophisticated detection, protection and defence systems in the epidermis and dermis. In addition to its protective function the skin also has a metabolic function, and a sensory function. Finally, it must maintain its integrity by repairing itself.
To carry out its protective task, the skin must be a resistant and impermeable barrier. This role falls in large part on the epidermis, directly impermeable.... but not impenetrable.

The Keratinocyte is a hydrophobic cell with a lifecycle is around 10-15 days from mitosis to arriving in the stratum corneum layer as a corneocyte; it will then take around 3-5 days to desquamate. All other cells of the epidermis have a lifecycle of 28-30 days.

It is the superficial layer of the skin (stratum corneum), which makes the skin impermeable and hydrophobic, protecting the underlying dermis and subcutaneous layers. This layer also resists chemical attacks, thanks to the corneocytes filled with the hard insoluble protein keratin the lipid cement (bilayers) and corneo-desmosome, which ensures cohesion between the corneocytes, and therefore impermeability.

Normal skin flora; are microbes, mostly bacteria, that live symbiotically in and on the body with, usually, no harmful effects to us. Three species of bacteria are particularly well adapted to withstand the acid environment and antibiotic peptides: Staphylococcus, Propionibacterium and Corynebacterium.

The micro flora of the acid mantle is an important part of human skin contributing to its function and activities. The various resident species are of an advantage in most cases but under some circumstances and with some groups of people the skin micro flora is involved in minor to major pathological processes, e.g. acne.
Maintaining the physiological pH of the skin is essential to avoid the proliferation of pathogens and an excess or lack of hygiene upsets the equilibrium of this cutaneous flora.

Hydrolipidic Film (acid mantle) also maintains hydration; free water from the dermis continually crosses the epidermis by capillarity and evaporates from the surface of the skin, known as the Trans Epidermal Water Loss, or TEWL (on average 9g/m2 of skin per hour).  In addition to creating an environment for the skin flora to reside, the hydrolipidic film (acid mantle) plays the important role of maintaining epidermal hydration by slowing down transdermal water loss (TEWL).  Plus creating a physical barrier to friction and movement. 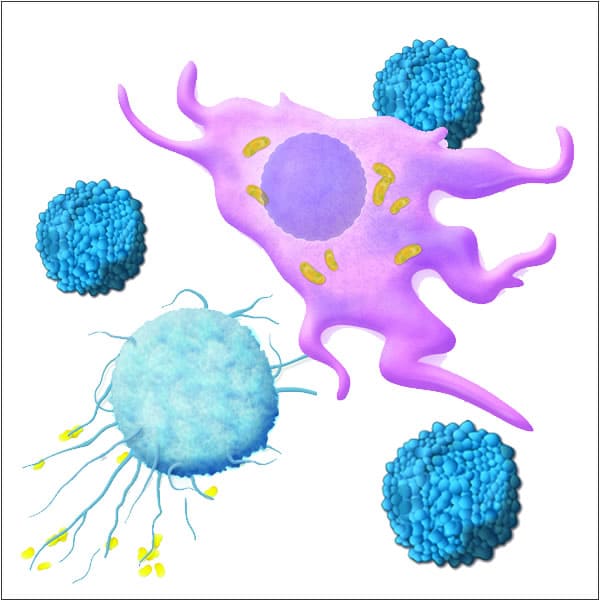 The skin has a very elaborate defence system, where different types of cells act together or successively. Langerhans cells (LC's), which are dendritic cells originating from the bone marrow, then by T-lymphocytes and macrophages. (See wound healing article) LCs: located above the basal layer, are large cells with long, branching extensions or dendrites.
Some of these reach the dermo-epidermal junction; others come close to the stratum corneum.
The close relationship between LCs and KCs through the LCs dendrites; together they form a genuine immuno-competent epidermal unit.  Although LCs make up only 2 to 4% of epidermal cells by number, they represent more than 25% of the skin barrier defence of the epidermis.
Langerhans cells are responsible for immune response against an antigen applied locally to the skin.

If the same antigen again penetrates the epidermis, even years later, it will be immediately recognised and the immunological reaction will be more rapid and effective. If the antigen however manages to cross this first line of defence, the macrophages of the dermis detect it and eliminate it. This duo is complemented by the keratinocytes, which, in the case of an infection, produce more cytokine IL1, which stimulates T-lymphocyte activity.

Unless you wanted to create an "inflammatory response" why would you compromise the integrity of the skin by continually removing the first "lines of skin barrier defence"?
Therapists often complain that their clients strip the skin to the point where it is red, sensitised and aggressed. So why as professional therapists, are we doing the same to our clients skin?

We know the removal of the acid mantle on a daily basis through harsh alkaline washes and toners will lead to an imbalance of the micro flora. Many skin care lines over used by clients, lead to an underlying sensitivity and an impaired acid mantle. The associated dryness that comes from this action exacerbates the blocking of the pilosebaceous duct, thus accelerating a micro-comedone problem. The machines, acids and enzymes that are being inconsiderately used by therapists are having the same result.

It is agreed that exfoliation of the skin is an important step in cleansing the face and body. It can remove the dead skin cells that may have accumulated on the top layer of the epidermis. However, why did the skin accumulate dead skin cells in the first place? This is a question that the therapist often never asks herself and one she should before embarking on a treatment program.
But general exfoliation is not my concern; it is the almost continual ablative removal of the epidermis that is being practised in the beauty and skin care industry, which inspired me to write this article. The overuse of professional peels and accompanying modalities for peeling, and the belief that continual peeling or abrading the skin will be the answer to wrinkles, pigmentation and acne when the causes of these skin conditions often have nothing to do with the build up of dead skin cells on the skin surface.
In addition, no further support or treatment is offered after the peeling program, no concern for the inflammatory response caused or healing required completing the treatment. Often, old fashioned (by today's standards) glycolic creams for continual home care are all that is being offered to the client.

So, "Why Peel"?
We could peel for the Penetration of Actives. Skin conditions such as pigmentation and ageing make up a large part of our clients concerns. The actives required to make changes to these skin conditions are often in the vitamin and coenzyme families, and the area of the epidermis and dermis to be affected by these actives is below the granular layer and dermal epidermal junction.

This is where a peeling modality comes into play, as a tool for the penetration of the active required to make the change to the skin cell. Not the answer but a tool. Peeling is only half the answer:

Removal of the upper layers of the epidermis includes many cells; in addition to this removal, a certain amount of trauma occurs within the dermis. This will involve fibroblast stimulation, increased blood circulation and the dermal reserve (glycosaminoglycans) is stimulated to react to this trauma, resulting in a plumper dermis.
There are many cell and support systems involved in this trauma, protease enzymes will be needed to address the removal of dead and unwanted protein, which will assist the formation of new proteins collagen and elastin. A well functioning lymphatic system plays a very big supporting role in these protease enzymes and all of the dermal action.

Before embarking on a treatment course, ensure that all backup systems are well functioning and that a good antioxidant and repair skin treatment program is in place.
The active ingredients available to assist are numerous, with  Vitamins A,C and E, Essential Fatty Acids, Amino Acids and the antioxidants alpha lipoic acid and carnosine for protease enzymes are a sound starting point.

Want to learn more about this topic? The online course "The Barrier Disordered Skin" from Pastiche Training expands in more detail.
Typical completion time is 3 hours. Accredited for 3 CPD points.